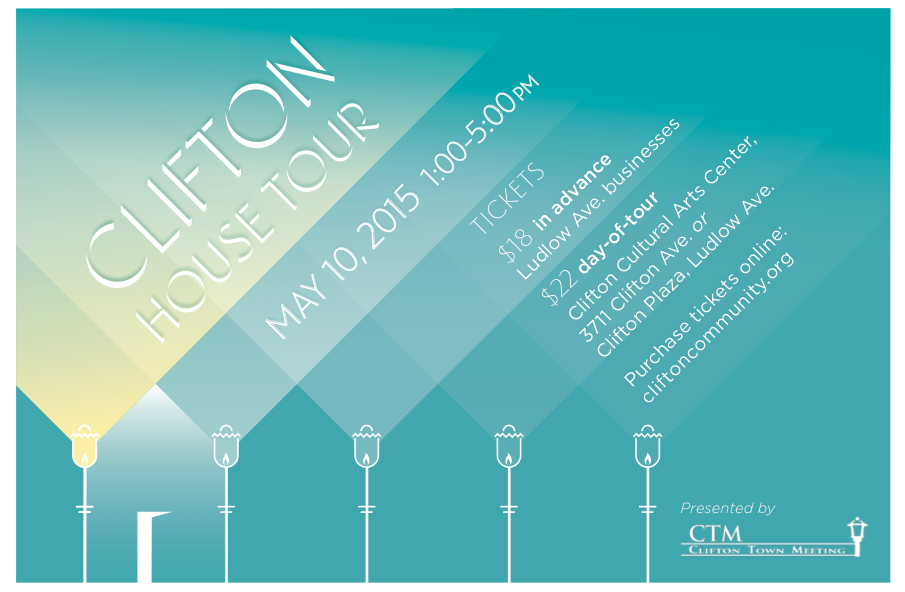 The Clifton House Tour happens every 3 years on Mother’s Day as a special presentation by Clifton Town Meeting (CTM). This year seven homes plus one historic monument will be available on the tour. These homes have special architectural features as well as historical stories that visitors learn about on the tour. Styles include Italianate, Mid-Century Modern, American Four Square, Italianate Victorian, English Tudor Revival, and International Style Modernist. There will also be a special monument on the tour.

Throughout the tour’s history, the gracious owners of more than 75 Clifton homes have shared this special Sunday with their neighbors. Clifton Town Meeting began house tours in the late 1960s and sponsored them throughout the ‘70s and ‘80s, taking a hiatus between 1988 and 1997. Since the resumption of the tours, the event has drawn people from all over Cincinnati and has been a great way to spend part of Mother’s Day.

The tour is CTM’s primary fund raising event allowing CTM to reinvest the proceeds back into the community through the various projects and services CTM provides year after year to the neighborhood, such as the publication of the Clifton Chronicle, neighborhood beautification events, support for the Clifton Plaza, and sponsorship of events such as the Memorial Day Parade and Picnic, Lantern Walk, Clifton Fest, and carriage rides for Holidays on Ludlow.

Tour buses provide transportation to the houses on the tour; however, many will walk between some or all locations. The day of the tour is when CTM makes the Tour Guide available that provides the details of which houses are on the tour. The Tour Guide also provides historical information on each house.

One home has been revealed so far –>click here.

View all posts by Kevin Marsh